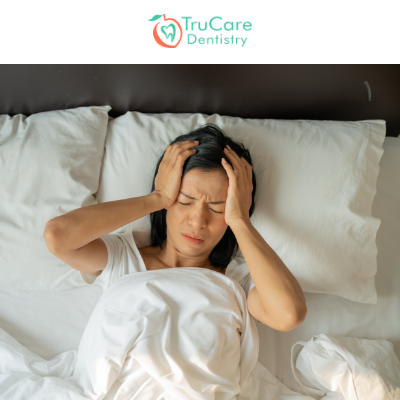 Sleep disorders come in different types and degrees of seriousness. As per one recent study, nearly 50 to 70 million American adults suffer from a sleep disorder. Some of them, such as insomnia, are relatively common. But some, like sleep apnea and narcolepsy, are extremely hazardous.

Despite their level of seriousness, they have some things in common—they affect productivity, quality of life, overall fitness, as well as dental health. But the good news is, once they’re diagnosed, they can be treated effectively and their impact on oral health can be reversed.

At TruCare Dentistry, we know the effect sleep disorders can have on teeth. We have treated many patients with sleep apnea and other sleep disorders. In this blog post, we have discussed three major sleep disorders in detail and how they affect patients’ dental health. Read on to know more.

Sleep apnea is a serious sleep disorder in which a person’s respiratory tract closes fully or partially during sleep and they stop breathing for some seconds. As the breathing starts and stops repeatedly, a pause can last for ten seconds or more. There are three types of sleep apneas— Central Sleep Apnea (CSA), Obstructive Sleep Apnea (OSA), and Mixed Sleep Apnea. The second type of sleep apnea happens when the throat muscles relax. It causes a sharp fall in oxygen levels and results in some serious health conditions.

However, the condition also causes a lot of oral health conditions. A majority of people suffering from OSA develop a habit of mouth-breathing which alters their facial structure and causes bad breath and dry mouth. The latter cause plaque buildup, periodontal diseases, gum inflation, and mouth sores.

As per a study published in the Journal of the Indian Society of Periodontology, gum inflammation affects more than one-third of people with OSA. The same research found that periodontal diseases affect nearly two-thirds of people with the condition.

OSA is responsible for another dental problem known as bruxism or nighttime teeth grinding. As per various studies, many people with obstructive sleep apnea suffer from bruxism and grind their teeth while they are fast asleep. A study published in The Journal of Oral & Facial Pain and Headache found that about a third of adults have bruxism and one-fourth of them are affected by OSA.

Bruxism has many signs and symptoms such as chipped and cracked teeth, erosion in dental surfaces, headache, as well as muscular pain in the jaw, neck, face, and head. Dry mouth, lips, and throat are also some common symptoms of bruxism.

OSA also causes a serious dental problem called temporomandibular joint (TMJ) disorder. One research published in the Journal of Dental Research found that people suffering from the condition are thrice more likely to have the condition. The research also revealed that people with more than one sign of obstructive sleep apnea are 73 percent more likely to be affected by TMJ disorder irrespective of their age, weight, race, and smoking history.

A study conducted by The American Sleep Apnea Association found that as high as four percent of children in the age group of two to eight years have obstructive sleep apnea. Pediatric OSA increases dental health risks manifold. Like in adults, breathing through the mouth can cause serious problems in children and affect their dental health.

Some common symptoms of sleep apnea are no or less breathing, loud and frequent snoring, struggling to breathe during sleep, headaches, reduced concentration and focus, fatigue and sleepiness, problems in the head, neck, and shoulders, and nocturia. Identifying the symptoms and getting treatments at the right time can reduce complications and damage to the teeth. Oral appliance therapy such as Continuous Positive Airway Pressure (CPAP) is the most effective and recommended treatment for the condition.

Insomnia, also known as sleeplessness or chronic sleep loss, is a common sleep disorder that affects at least one out of every ten people in the world. With reduced sleep, the production of saliva is reduced to a large extent and it causes a host of teeth and gum problems.

As per a study, insomnia increases the risk of periodontitis by a huge 36 percent. It also increases Night Eating Syndrome, an eating disorder, which causes people to snack several times in the night in an attempt to fall asleep. Frequent nighttime eating not only increases the chances of getting cavities and dental caries but also weakens the tooth enamel and causes it to break prematurely.

Even though there are no sure-shot techniques and appliances such as airway pressure machines and oral appliance therapy for insomnia, some treatments such as light therapy, cognitive behavioral therapy, and aromatherapy can help.

Narcolepsy is a chronic sleep disorder that affects a person’s ability to wake and sleep and causes extreme daytime drowsiness. This sleep disorder can affect a person’s dental health in more than one way. People with narcolepsy are more likely to fall asleep without brushing, which can cause tooth decay and cavities. A majority of them also grind their teeth and clench their jaw as they sleep, which causes enamel damage and many other complications.

Another major problem associated with narcolepsy is damage to the teeth and injuries. As people with narcolepsy tend to fall asleep many times during the day, the chances of accidental dental injuries and oral emergencies also increase.

Narcolepsy can cause hypersalivation, the increased saliva production during frequent sleep cycles, which can also lead to mouth infection and chapped lips. The condition is a bit serious and it needs the intervention of a general practitioner or a specialist, who will observe the condition and prescribe the right medications or treatments.

There is a close link between the quality of sleep and dental health. A good night’s sleep contributes immensely to healthier teeth. Conversely, poor sleep results in unhealthy teeth. But some sleep disorders such as sleep apnea and insomnia are more harmful to teeth and gums than others. At TruCare Dentistry, we have a proven track record of dealing with such disorders and treating the affected teeth effectively. If you are looking for an experienced dentist in Roswell, GA, call us today or book an appointment.