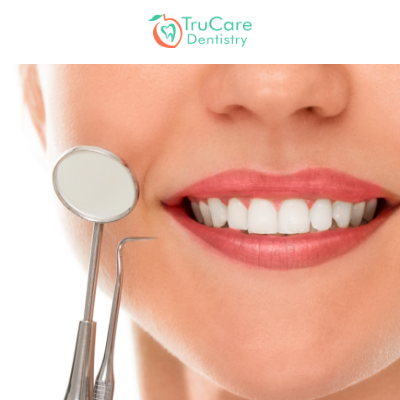 Teeth are one of the most magical parts of our body. Not only do they enable us to eat our food effortlessly but also enhance our charm and personality. Need proof? Just flash a warm and sincere smile at anyone and feel the magic.

What’s even more intriguing about them is the way they develop throughout our life. If you are a young healthy adult and you take good oral care, then you are most likely to have 32 permanent teeth. Do you want to know more about them?

At TruCare Dentistry, we got you covered. In this blog post, we discuss the names of your teeth, their numbers, and their functions in detail. Read on to know more.

We have four types of teeth—incisors, canines, molars, and premolars. Each of them works like vital cogs in a sophisticated machine and serves a unique purpose. When all of them are together, they not only enhance our smile and appearance but enable us to eat our food in the best possible manner by working in tandem. Let’s explore each of them in detail.

These are the most prominent teeth in the mouth, which are easily visible while smiling or talking. They derive their name from the Latin word ‘incidere,’ which means to cut. As the name suggests, the main function of these chiseled-shaped teeth is to cut and shear food as well as grip the food and get it into the mouth.

Also called the front teeth, they are located at the center of your mouth, four at the top and four at the bottom, totaling eight in number.

Babies with a full set of milk teeth also have eight incisors, which erupt at different ages and stages of tooth development. Usually, the lower central incisors (two front teeth at the bottom) erupt first when a child is six to seven months old. Upper central and later incisors appear after four to eight weeks.

The name canine is derived from the Latin word ‘canīnus.’ These four pointy sharp teeth are located at each side of the incisors and the main function of these teeth is to tear and rip open food.

Having the longest root of all the teeth, these are firmly rooted in the mouth. The upper canine teeth are longer and larger than the lower canine teeth.

Also called bicuspids, premolars exist in pairs just adjacent to the canines. With one pair in each quadrant, there are eight premolars in the human mouth. Each of the premolars has at least two cusps.

Being transitional teeth, they show the characteristics of both canines and molars and help in grinding and mixing food while chewing.

Unlike incisors and canines, there are no deciduous premolars. They are permanent by design and the first premolars erupt between ten and 12 years of age.

The molars are large flat teeth that are located in a set of three, adjacent to the premolars, at the back of the mouth. Their main function is to grind food while chewing. The teeth get their name from the Latin words ‘mola dens,’ which means millstone tooth.

Three molars in each quadrant mean that there are 12 molars in an adult. The rearmost molar in each set is called a wisdom tooth, which is the last tooth to erupt in about the early twenties.

Sometimes wisdom teeth don’t erupt completely or get crowded or impacted due to inadequate space. A smaller mouth may not be able to accommodate all the teeth and can result in overcrowding, which would cause the wisdom teeth to emerge at an odd angle. That’s when they are required to be removed. It is, however, crucial to get the impacted wisdom teeth removed by a proficient and experienced dentist.

Did you know that each of your teeth has a specific number? The numbering is done as per the American Dental Association’s Universal Numbering System.

The top right tooth in the back, which is the top right wisdom tooth, is number one, and the count proceeds till it reaches the top left back tooth that’s number 16.

The bottom left tooth in the back is number 17 and the number continues till it reaches the bottom right tooth, which bears the number 32.

To mark the changes in your teeth, dental professionals use a diagram and chart. These numbers help dentists to educate people about their teeth.

Overall, it may be concluded

Teeth are one of the most important parts of our body so we must know all the basic things about them and do everything we can to keep them healthy. An average adult usually has 32 permanent teeth that comprise eight incisors, four canines, eight premolars, and twelve molars. Consistent dental hygiene and care can make them last for a lifetime. At TruCare Dentistry, we completely agree with legendary Spanish writer Miguel de Cervantes who famously said “every tooth in a man’s head is more valuable than a diamond.” If you are looking for a trustworthy dentist in Roswell, GA, feel free to contact us and know what services we can provide you.