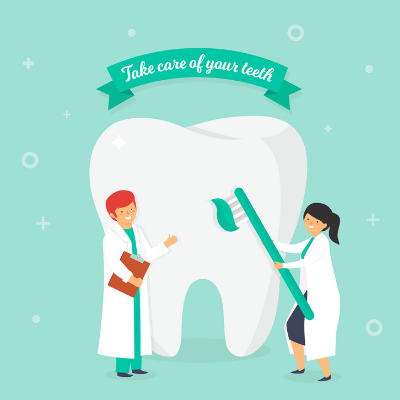 In spite of brushing and flossing appropriately, some individuals end up with poor oral health. That’s because people drink items that can damage the teeth. Surprisingly, besides sugary juices, even soda, energy/sports drinks, and sparkling water make it in the list of items that can harm oral health. Drinking too much of these beverages can cause dental cavities, decay, bad breath, and even gum disease.

In February this year, the news story about Vinnie Pyner, a 21-year old from South East England’s Margate town attracted a lot of attention. The boy shared pictures of his rotted teeth and claimed his energy drink addiction led to the same.

He pointed out that he followed proper brushing routine. But slowly, his teeth cracked and the overall oral health kept on worsening. Pyner realized the damage caused due to his addiction only after visiting a dental clinic. Dentists used dentures along with 24 filings and other dental work to get his oral health back on track.

Health officials and physicians have always been warning people not to develop an addiction to energy drinks due to their high caffeine, acid content, and other ingredients.

What soda does to your teeth/bone?

Soda lovers from around the world were in for a big surprise when a study compared the harmful effects of soda consumption on tooth enamel with that of erosion caused due to illicit drugs.

The General Dentistry Journal had published a study titled “Dental Erosion Due to Abuse of Illicit Drugs and Acidic Carbonated Beverages,” in March-April 2013 edition.

As a part of the study, three individuals (an excessive soda consumer, cocaine user, methamphetamine user) were under observation to find the impact of the three substances on oral hygiene. The concerned soda abuser drank at least two litres of diet soda daily, for five years.

Researchers found that all three had the same level of tooth erosion damage and poor oral health. The result highlighted the point that soda is an acidic carbonated beverage that erodes tooth enamel. All three, pop, crack, or meth, can cause the same kind of tooth erosion due to high levels of acid present in them.

Some brands of soda contain carbon dioxide molecule, hydrogen and sodium atom, and sugar besides other ingredients. The dangerous combination not only damages the tooth enamel but also triggers decay and dries tissues inside the mouth.

Perhaps, soda’s bone-depleting effect is the most serious one. The phosphoric acid present in the drink attracts and accumulates calcium, zinc, magnesium after reaching the intestine, and leaves the body with urine. Thus, soda lovers often face bone-related issues as they suffer due to lack of minerals.

How does sugar damage your teeth?

Sugary beverages leave sugar particles on the teeth. Acid-producing bacteria present in the mouth consume these particles to grow further. They slowly eat away the tooth enamel making it weaker thinner, resulting in cavities and dental decay.

Even consuming too much of acidic fruit juices or non-sugary drinks can result in dental erosion due to the presence of tartaric, citric, phosphoric acid, and other ingredients.

Can sparkling water damage your teeth?

The famous carbonated water or sparkling water served at restaurants and clubs as an alternative to sugary drinks can prove to equally harmful for teeth according to studies. Some brands of sparkling water contain minerals and salt. Their pH level lies between 3.0 and 3.99, thus, rated as erosive for teeth. Put simply; they do damage the tooth enamel.

Besides sugary fruit juices and soda, even medicated syrups that contain sugar can damage the teeth. Do speak to your dentist if you experience any dental issues after consuming such syrups. It is advisable to brush your teeth after an hour from drinking liquid medicated syrups. Dental care expert might recommend the use of fluoride mouthwash to such patients.

The dental erosion triggered by acidic beverages tends to impact the grooves, pits of the teeth.

Items that have a pH level of 7 or lesser are considered acidic, while foods with 8 and 14 are alkaline. Non-carbonated beverages, including root beer, that do not contain citric and phosphoric acids are least acidic.

Drinking grapefruit, orange, or other highly acidic fruit juices can degrade your dental health and worsen medical conditions like heartburn as well. Thus, non-acidic, alkaline drinks are the best options to quench your thirst.

When it comes to low acid soft drinks, root beer (with a pH of around four) ranks the best.

Some of the most preferred lesser acidic juices are cabbage, aloe vera, watermelon, beet, cucumber, and carrot juice.

Options like herbal tea, soy milk can prove to be reasonable, no doubt. Due to its alkaline composition, almond milk also helps in relieving reflux symptoms and stomach acidity.

But, if you are looking for a natural alternative that can work as a substitute for your sports drinks; you should consider opting for coconut water. It offers the perfect combination of dietary fibre, calcium, riboflavin, and Vitamin C that are perfect for getting the best out of a vigorous workout. Look for natural coconut water or the least processed one if you are buying it from a mall.

Try satisfying your cravings on your own by opting for homemade juices made from least acidic foods.

Unfortunately, the simple and most preferred traditional lemonade also makes it in the list of sugary stuff. However, these days, local lemonade stands offer lemon juice made with alkaline water. The mineralized water helps in retaining Vitamin C, potassium, and folate out of a lemon, and reduces its acidity.

How to maintain good healthy teeth?

Experts advise people to avoid consuming too many fizzy drinks. If it is fizzy, it is undoubtedly dangerous.

You can prevent your teeth from becoming sensitive by opting for low acid beverages. Coffee, black tea, milk, root beer, and tap water show minimum adverse effects on enamel. Milk benefits the most by maintaining a neutral pH of saliva.

Are you someone who cannot merely give up soft drinks or soda consumption altogether? You should at least follow some necessary steps to reduce the damage.

Avoid the consumption of sugary beverages as far as possible. Opt for juices that contain substitutes of sugar and added calcium. Use a straw with such drinks so that the sugary substances won’t accumulate in the mouth. Rinse your mouth after drinking soda. Always use a toothpaste containing fluoride, phosphate, and calcium.

Do you wish to know more about side-effects of soft drinks, soda, liquid medicines, and treatment options for the same? You can always call and fix an appointment at Roswell (GA) based TruCare Dentistry.